Extract > Apothecary Melchior and the Ghost of Rataskaevu Street

A sneak preview of

Apothecary Melchior and the Ghost of Rataskaevu Street

DEATH SMELLED OF sweet putrefying blight, of something old and mouldy. Death reeked just like a dead dog wrapped in yeasty dough, and it was nearby. It greeted Tobias Grote, tenderly, invitingly, even alluringly.

They had met before, many times. Tobias Grote was a soldier, and he calculated that at least nine men and one woman had died by his hand. But this Death which was now calling to him was … unjust. yes, he thought he should not die yet, not because of a ghost, not like that. He saw something like a white shape clad in a death shroud approaching him, and he knew the stench of its stale mouldi ness, its insipid rotting stink, and he felt its pain, which was more than one human could bear.

Pain can probably kill you, Tobias Grote, Master of the Quad Dack Tower, was thinking now. It is pain, after all, that kills a man, when he takes so much of it that the body and soul can no longer endure it, and it is simpler to give in to the pain, simpler to die.

And then? What happens next? Will I find out whether every thing the Church tells us is really true? Will the Redeemer be waiting for me, and will he tell me why he sent that stinking apparition after me, why he marked me out in that way, why my path finder to the heavenly kingdom was this revelation which had, after all, once been human?

Yes, Master Grote was sure of that. That the one chosen as his angel of death had once been a person of flesh and blood, and he had no idea why he was being punished in this way at the last moment of his life, why he had been sent for. The ghost had appeared to him yesterday for the first time, wanting to announce something – but what? He had not understood it then, but now he under stood, at his own last moment, why it seemed so tall and at the same time so short. Now he understood. The ghost had come to call him away, to tell him that his time had come. From some corner of his memory Tobias Grote recalled an old hymn; he thought of his brothers, who must be waiting for him in death, his three younger brothers, who had all died in the days of the sea battles.

Tell my brothers I am on my way,

Let them wait for me in the icy silence.

Let those who remain alive mourn.

He could not remember where or when he had heard that verse – in the tavern, in church, from his brothers in arms or somewhere else – and it did not seem important. The only thing that made him wonder, the only thing throbbing in his head as he awaited his last breath in inhuman pain, was the question of why had this ghost, this apparition with its rotten stench, come to beckon him and not his brothers, not his father or mother.

Only yesterday, yes, it had been only yesterday when the ghost risen from the dead appeared to him for the first time, for one brief moment, and then it had vanished and left Master Grote dismayed and puzzled. Tobias Grote was not yet fifty, and his health was robust, thank God, although his old sword wounds made him ill in bad weather and he was half-blind in the left eye. Nevertheless, he was in full vigour, a strong man, who could hold a battleaxe in his hand, knew how to load and shoot a firearm, and he knew what loyalty and an oath of fidelity were. He had sworn loyalty to the town of Tallinn, and he was proud that the simple son of a tailor from near the town of Travemünde had become the master of a tower in the walls of one of the finest fortresses of the Teutonic Order. And the master of no ordinary or out-of-the-way tower but one of the biggest and strongest towers, almost the foundation of the Order’s fortifications, defending the town and the holy sisters.

Tobias Grote had found himself in Tallinn over twenty years ago, when he had been serving as a soldier on a ship from Lübeck. He had found a wife here and stayed. Every soldier on a ship was allowed to do a little dealing on his own, so as to give better service and have more incentive in the fight against pirates. Over the years Grote had acquired a small fortune from such trading, which he had then brought to Tallinn and given the town his loyalty and courage; he had been conspicuous for his service as a town guard and for his diligence until, finally, he had been promoted to Master of the Quad Dack Tower, next to the convent, a post that gave him a permanent and secure income. His wife had already died and his two sons were sailing the seas, conducting trade and, when necessary, using their swords. Formerly the tower had been named in honour of Hunemann, the councillor who erected it, but when, after it had been made taller, the roof began to cave in and the nuns had not taken sufficient care over the repairs, the name Quad Dack began to stick – ‘the tower with the shabby roof’.

Grote was, by his own estimation, a God-fearing man, as far as that was possible in his post. He donated as much as he could to the Guild of the Holy Body and diligently attended the convent to hear sermons when they were preached to the townspeople there, and sometimes he worked free of charge for the good of the nunnery, chopping firewood, making the odd repair and teaching the young members of the guilds and the town’s defence force how to cut down an enemy with a battleaxe or how to defend the convent better if an enemy should attack the town. The threestoreyed Quad Dack Tower was in the grounds of the convent, and the old town wall surrounding the convent was built into it. Entry to the tower was from the middle floor, to which steps climbed from the courtyard, and between the new and the old town wall was a patch of gravel which stretched to the nearby Louenschede Tower and from there to the stables. The Quad Dack Tower and this narrow patch of ground were both under Tobias Grote’s super vision, and it was his responsibility to defend it in the event of an attack. In his own view he had managed this job well, and he had never offended against a single saint and had lived a life pleasing to God, so now, at the last moment of his life, he thought this death meted out to him was unjust.

It had been late yesterday evening, as he was heading home from the nuns’ tavern to the little house facing the yard on the corner of Lai Street, when, as if from another world, the spectre had appeared before him from Rataskaevu Street – the shade of a person once alive, which had stretched out its hand to him and wanted to say something, admonish him, warn him or announce some holy act. Grote had seen it only for a moment by torchlight and had been frozen into a pillar of salt from fright before some dim shadows had swallowed up the ghost on the spot or taken it back to the land of shadows. Grote had stopped at the door of his home to pray and to think. Had he drunk too much of the nuns’ spicy ale, or had he really been confronted by a ghost risen from the dead? But he knew that it was real, not a dream, because he had been drinking beer a couple of times a week at the nuns’ tavern, and he had been blind drunk thousands of times in his life, but he had never seen devils. No, no, yesterday he had not been so drunk that he would see something that wasn’t there, so he really had seen a ghost. That was his conclusion.

And the following morning, after he had cautiously told his housekeeper about it, it all seemed even clearer, and the image of the ghost was more sharp in his mind than any ordinary everyday thing. So that morning he had gone to the shrewd Melchior, the apothecary, who always had some good medicinal potion for over indulgence in beer, and after that he had gone, on his housekeeper’s recommendation, to the Dominicans, because one of the brothers, Hinric, was said to know everything about evil spirits and even, if necessary, how to drive them out.

But Grote hadn’t been able to, just couldn’t, explain to Hinric exactly what it was that had brought him to the monastery, and in the end Hinric, who always had plenty to be getting on with, concluded that if the Master of the Tower would drink less ale and sweet medicinal potions he might see fewer demons –and maybe a proper steam bath might drive them out of his head for ever.

But now death had come to visit him, in the ghostly hours, when Grote’s head had been swimming with beer, and it was beginning to seem to him that that previous time the ghost had really been a mere phantom. And then he had heard his name being called quietly.

Throughout the day it had been raining torrentially in Tallinn, as the townspeople had long been expecting, draining the filth from the streets, and, after the rain in the early evening, the wind dropped and the fog set in. Into that fog the Tower-Master had stepped; he came out of the door on the second floor of the tower on to the wooden walkway above the arched alcoves. He remembered no more, for at that very moment he fell. And now he lay on the ground where he had landed, between the nunnery and the town wall. Most likely no bone or joint remained intact. His body was racked with pain, and through the mist he saw the ghost approaching him, shrouded in a white cloak. He smelled the stench of rotting putrefaction and mould. The ghost approached, and suddenly a hot light flared up all around.

He saw the face of the ghost leaning closer to him in the light, and he wanted to scream because what he saw was …

It wasn’t possible. It couldn’t be. This was madness. He refused to believe it, and yet he knew that what was looking at him was his own death. The ghost had let him know who or what it was, and death now seemed even more unjust to him, even more senseless.

In the last moment of his life he thought of his own sons and begged God that their deaths be more merciful.

Order your copy of Apothecary Melchior and the Ghost of Rataskaevu Street today! 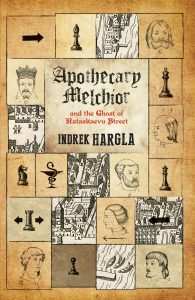 Apothecary Melchior and the Mystery of St. Olaf’s Church