Novelist Fleur Smithwick, author of How To Make a Friend and One Little Mistake, got in touch with us via Twitter with the following photo of her mother Rose Knox-Peebles wearing a fur coat given to her by her friend Anna Kavan, the enigmatic author of Ice, Asylum Piece and many other intriguing titles.

Rose Knox-Peebles, attended by dogs, wearing the fur coat given to her by Anna Kavan

Fleur tells us the photo was taken in the 1970s and that her mother adored Anna Kavan and has recently been made an honorary member of the Anna Kavan Society executive committee. Indeed, Rose Knox-Peebles was one of the most useful of first-hand sources for author and poet Jeremy Reed when he was researching his biography A Stranger on Earth: The Life and Work of Anna Kavan. Talking to Jeremy Reed about Anna, Rose commented that Kavan had confessed to her that “the reason she bought so many clothes was that she never dared walk out of a shop without buying anything.”

‘Few contemporary novelists could match the intensity of her vision.’ – J.G. Ballard 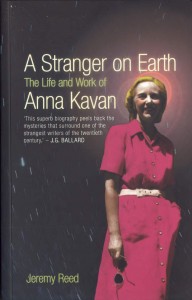 Kavan seems to have chosen to frequent quite expensive shops, and her old school friend Ann Ledbrook was among the lucky recipients of some of the accumulated sartorial bounty. There was far more than Anna Kavan herself could ever have needed, and Ledbrook’s daughter Rose, also a friend, became the awed recipient of some of these cast-offs, as you can see from the photo above.

‘I was about to become the world’s best kept secret, one that would never be told. What a thrilling enigma for posterity I should be.’ – Anna Kavan

Kavan had many incarnations – she was Helen Woods, Helen Ferguson and Helen Edmonds before she reinvented herself as Anna Kavan, naming herself after the protagonist of two of her early novels. Significantly, Kavan suffered debilitating depressions and was a long-term functioning heroin addict – both factors that informed her work as author and artist, sometimes obliquely, sometimes overtly. Usually she was poised, glamorous and calm. Rose Knox-Peebles recalled seeing Kavan self-administering heroin “by lifting the hem of her skirt and injecting herself in the thigh.” Another friend and confidant, however, saw Anna Kavan throw a roast chicken across the table before “withdrawing to the bedroom where she was discovered picking at a box of chocolates.”

‘I became obsessed with the work of an almost unknown writer, the late Anna Kavan. The book that started me off on my Kavan obsession was this one, Julia and the Bazooka, and after that I devoured all her books in one fell swoop.’ – Virginia Ironside 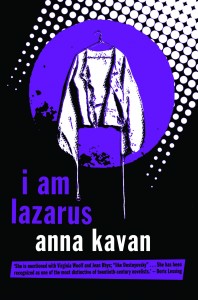 Of course there is much more to Anna Kavan than a short list of quirks can convey. Interest in her work has grown since her death in 1968 and she has been favourably compared to Sylvia Plath, Virginia Woolf, Djuna Barnes and her much-admired Kafka. However, the experiments in many of her works with non-linear narratives, surreal, fantastic and science-fictional elements and dark psychological landscapes mark her out as one the 20th century’s most creative and inventive writers.

‘She wrote of lunatic asylums, feelings of alienation, addiction – her internal loneliness was tangible . . . She’s not a writer for those who like uplifting books or happy endings. She writes of a terrifying inner landscape of evil and threat . . . And yet, for anyone who has experienced the merest whisper of true depression or mental illness, her books . . . are strangely reassuring and comforting.’ – Virginia Ironside

If you’re embarking on an exploration of Anna Kavan’s writing, the short story collections Julia and the Bazooka and I Am Lazarus are a good place to start. Both have useful introductions, the first by journalist author Virginia Ironside, the second by academic Dr Victoria Walker, founder of the Anna Kavan Society who is also working on a definitive Kavan biography. If these excite you to further inquiry, Jeremy Reed’s aforementioned biography A Stranger on Earth gives great insight into her unique life and exceptional work as author and artist, with many photographs of Kavan, her associates and a good selection of her surviving paintings.

‘[Jeremy Reed’s] superb biography peels back the mysteries that surround one of the strangest writers of the twentieth century.’ – J.G. Ballard

‘Anna Kavan, with her frightening glimpses of the dark sides of life, is one of the world’s best-kept secrets. Her extraordinary life deserves this fascinating biography.’ – Virgina Ironside

Our page on this fascinating writer and her works can be found here: Anna Kavan.

‘So well are they written, so clearly and baldly told, and with such narrative power, that you feel you are a doctor caught as in the spell of a mad Ancient Mariner.’ – John Betjeman, discussing I Am Lazarus