Gabriela Babnik’s novel Dry Season takes on the themes of racism, the role of women in modern society and the loneliness of the human condition.

The novel follows the story of Anna, a 62-year-old designer from Slovenia and Ismael, a 27-year-old from Burkina Faso. What unites them is the loneliness of their bodies, a tragic childhood and the dry hamartan season, during which neither nature nor love is able to flourish. Anna soon realises that the emptiness between them is not really caused by their skin colour and age difference, but by the Western culture she has adandoned. Sex does not outstrip the loneliness, and repressed secrets from the past resurface into a world Anna sees as both crueller and yet more innocent than her own. Cleverly written as an alternating narrative, the novel is interlaced with magic realism.

'Dry Season is a colourful tapestry, interwoven with elements of two different worlds, two completely different lives. It is much more than just a story of an unusual relationship between an older white women and a young African man, both burdened with post traumatic experiences. It is a mature, critical and inimitable writing with a global insight into the African society of today.' Librarian’s Comments,  International Dublin Literary Award 2017 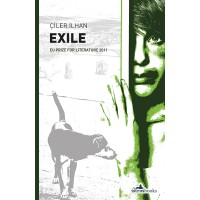 Exile is a collection of short stories with the taste of a novel...